Continuing on our drive towards Port Macquarie, we took another rest stop in the beautiful country town of Grafton, NSW. I had the pleasure of living there for 11 months in 1988-89 and my oldest son (the prodigal) was born there.

The beauty and peacefulness of the town was much the same, however in 24 years Grafton has grown enormously. We had the pleasure of spending an hour with my blogger friend Karen, husband Jim & their beautiful family. As we drove off on our way, I couldn't help but stop to take a reminiscent shot of the river we used to water ski on each afternoon... 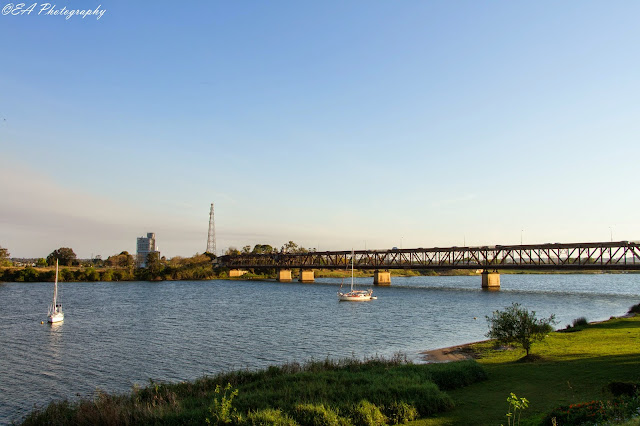 The aim was to catch sunset in Coffs Harbour after we left Grafton, but we enjoyed watching it set over the mountains to the west as we drove south. By the time we reached Coffs Harbour, it was almost dark. I didn't mind though, as we just found the local jetty and I took the opportunity to shoot one of my favourite forms of photography... night time Long Exposure. 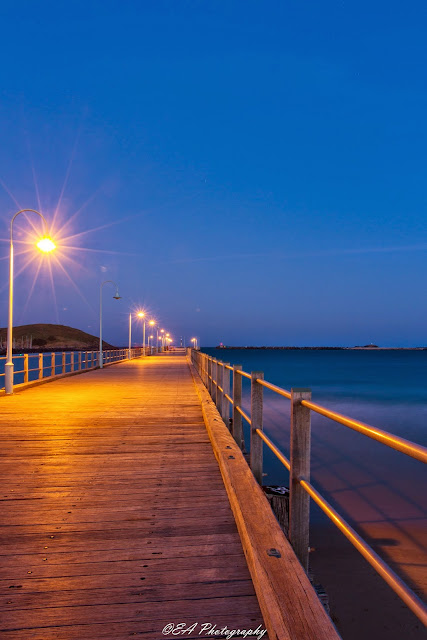 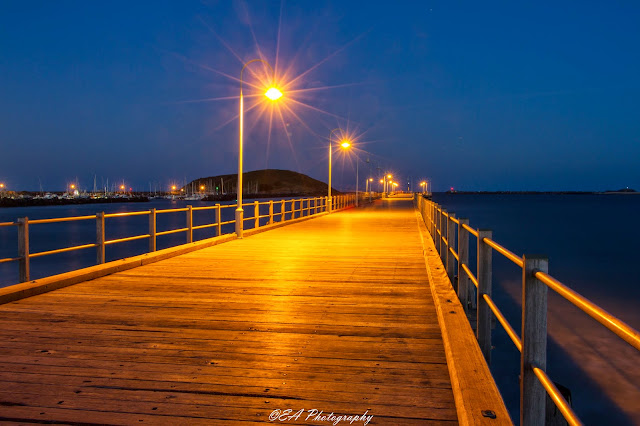 As we were running quite late, we decided to drive straight to Port Macquarie from Coffs without any more stops. This turned out to be a risky decision with my DVT. We arrived in Port Macquarie at 8:45pm, had dinner, and around 11pm I noticed that my left calf and ankle were quite swollen so Michael made a call to the local hospital and I was advised to go to emergency. We were there until 3am, so the next day was declared a sleep in, rest day.

But late afternoon, the swelling in my left leg had subsided enough so we decided to go down to the breakwall area of the Hastings River for sunset. 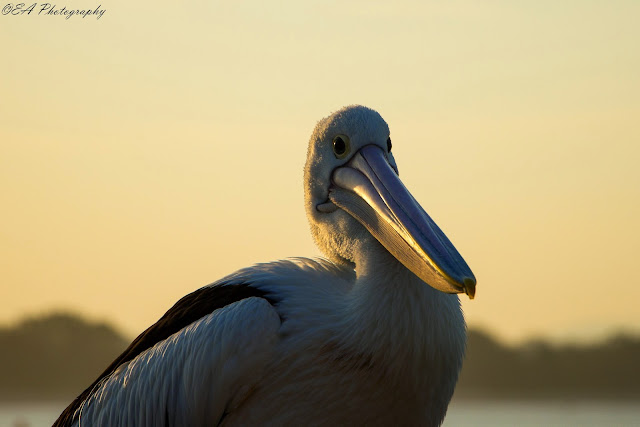 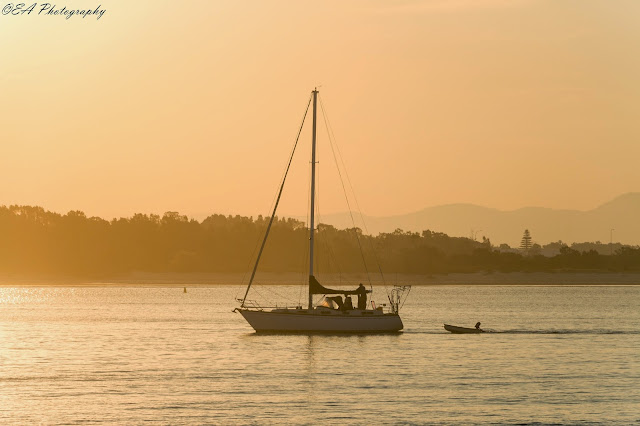 I also had the chance to try out my new GND filters. 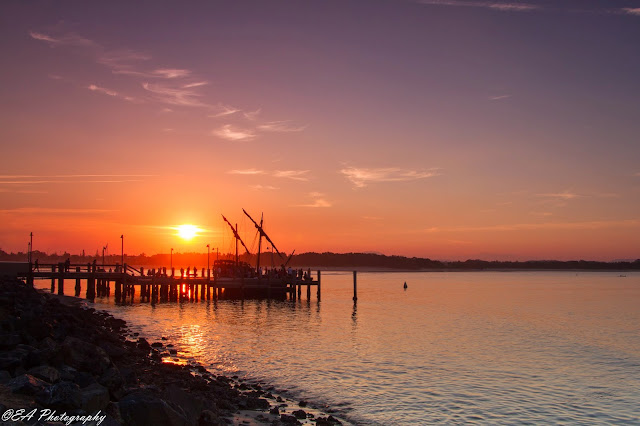 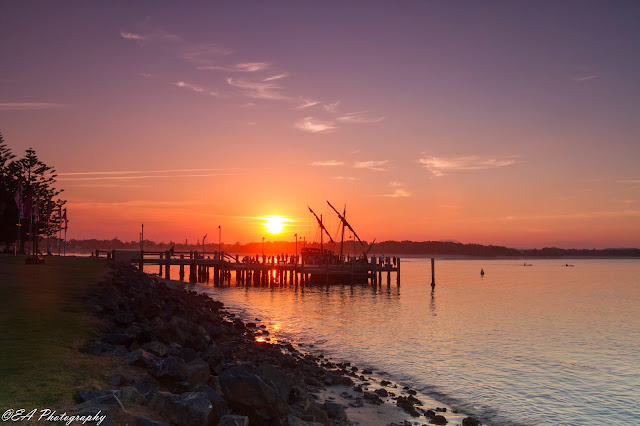 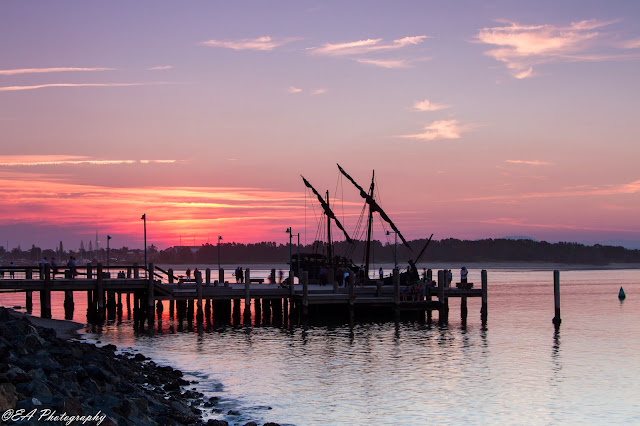 The ship docked at Lady Nelson Wharf is called the "Notorious". It is a replica of a 15th century Caravel which took 10 years to build entirely out of reclaimed timber. The owners have been voyaging the eastern Australian seaboard since February 2011. 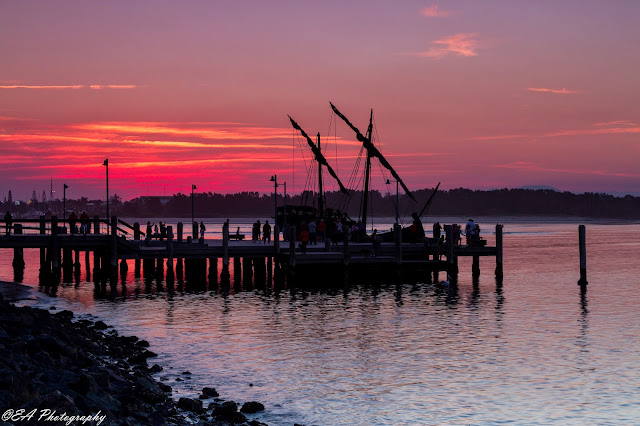 Lovely photos, and as usual, GREAT storytelling. We had a wonderful holiday, and these are beautiful memories which we can treasure for a very long time. xo

Splendid post! I hope to get some "by the sea shots next week" - I especially liked the ambient light shot down the pier.

Brilliant photos mine pail in comparrison.I'd really like you night shots and sunsets.

Amazing wonders in my life said...

Beautiful series! The night shots and sunsets are lovely. Thanks for sharing your trip! Have a happy day!

really lovely shots, but that must have been scary with your leg!

Lovely photos! I adore that jetty at Coffs Harbour. When I was 22, I went backpacking around NSW on a whim and remember arriving in Coffs at night and immediately strolling out on the jetty. I was shocked to see a massive swirling school of Eagle Rays circling right next to me - it felt like a very special place.

Gorgeous photos, as always! I love the sunset!

Just gorgeous! This time of year for me the sky starts to get really incredible but as soon as the time changes in a few weeks it will be awfully early to have to get up for the sunrise again.

Hi Liz! Indeed, you got wonderful photographs of the sunset. just looking stunning..
thanks for sharing with us.
Hugs
Erco Travels

A remarkable bird is the pelican
His bill can hold more than his bellycan.

Lovely photos of your wonderful time away. I'm pleased your health didn't prevent you for enjoying this special time. It was great to meet you in person also Liz and your wonderful husband.

Looks like you got some fantastic shots while you were away! I haven't had a lot of time to read blogs lately but when I saw your pictures on your site today it brought a huge smile to my face! Sometimes our hobby really helps us forget about all our pain doesn't it.

Great shots, and what a beautiful sunset.
Lovely colors :)

oh so beautiful, each moment you've shared with us!

oh so beautiful, each moment you've shared with us!

All the best from a fellow Brisbane resident...