After our week long Alaska cruise, we docked in Seattle relatively early in the morning on Saturday 9th May. We were so exhausted from a very late night in Victoria BC that we didn't even feel the ship docking. We had requested the 9am disembark time to avoid mad the rush.

We dropped our luggage at our hotel, The Westin, and took the local monorail to the Space Needle which is 520 ft high and has spectacular 360 degree views all over Seattle and the waterways. 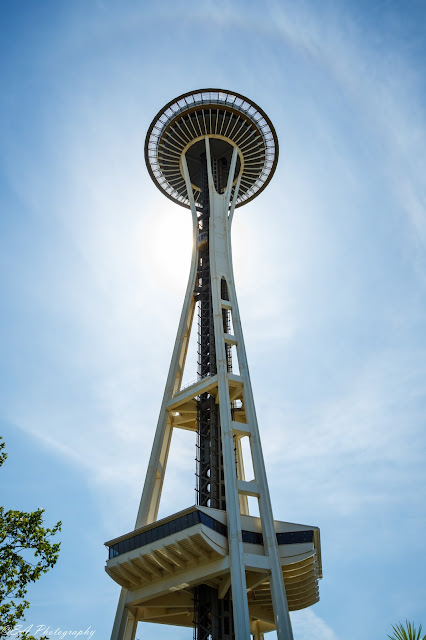 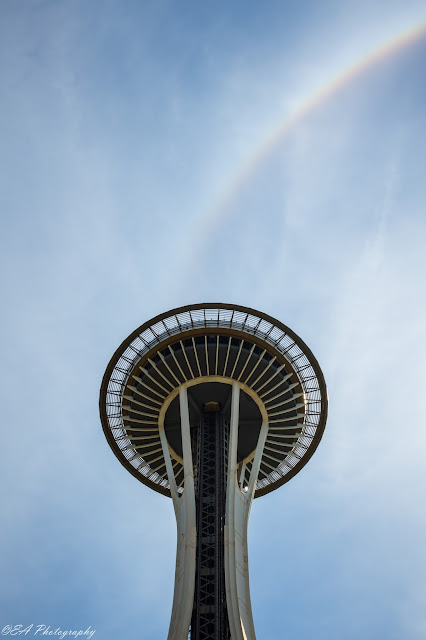 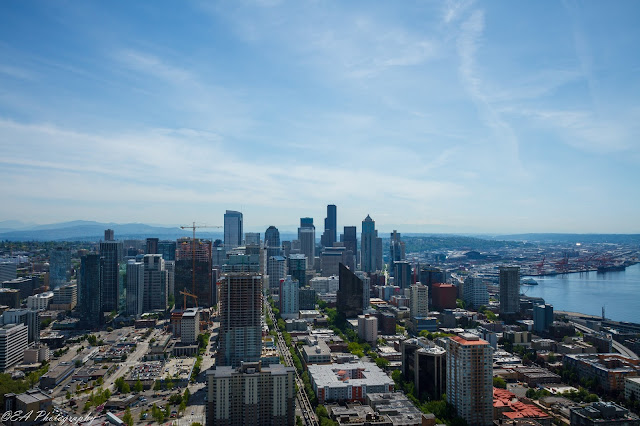 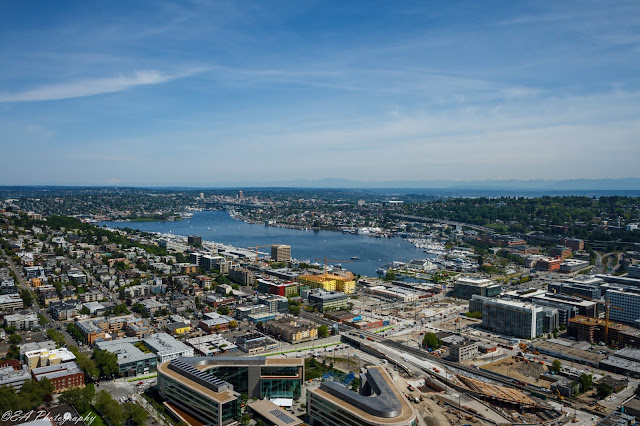 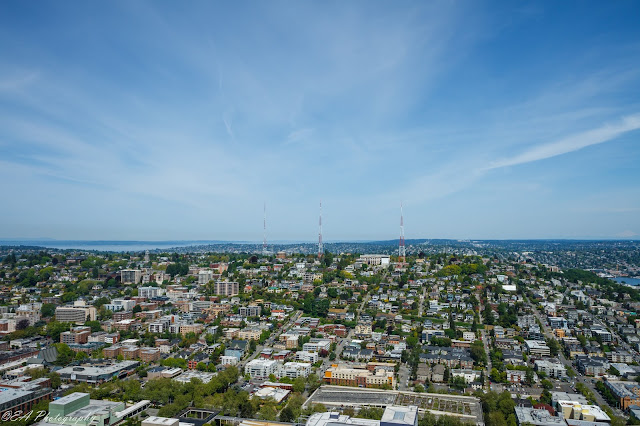 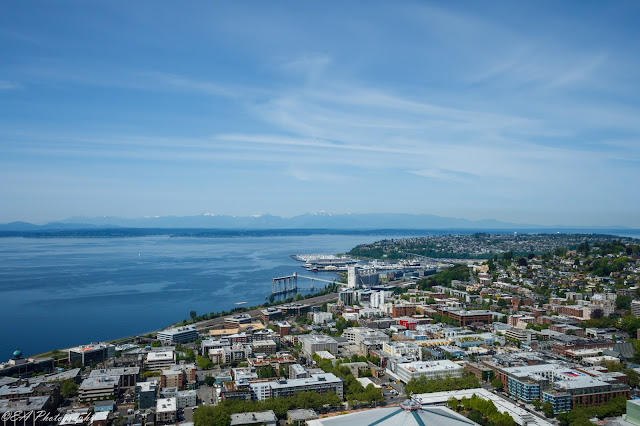 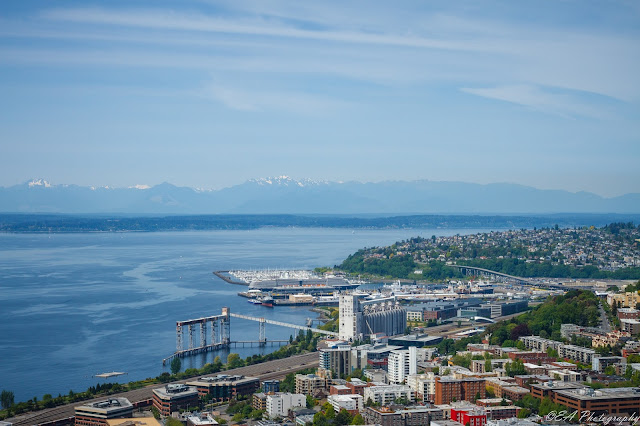 After taking many photos, we lunched on hot dogs and Dr Pepper, like true Americans, before returning to the monorail, and passing via See's Candies en route to the hotel.
The Westin has views over Puget Sound and we watched the MS Westerdam as she sailed away at 6pm on her next Alaskan cruise. 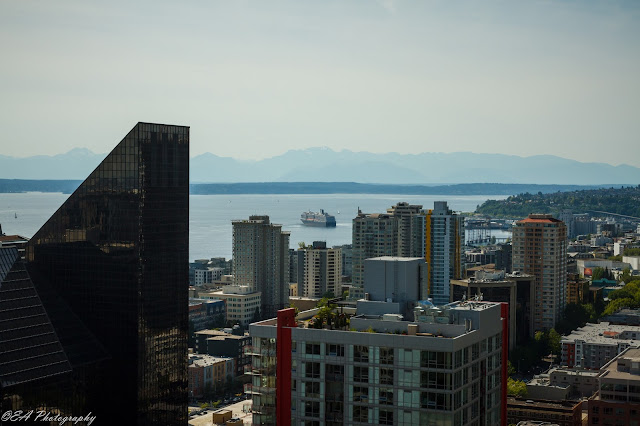 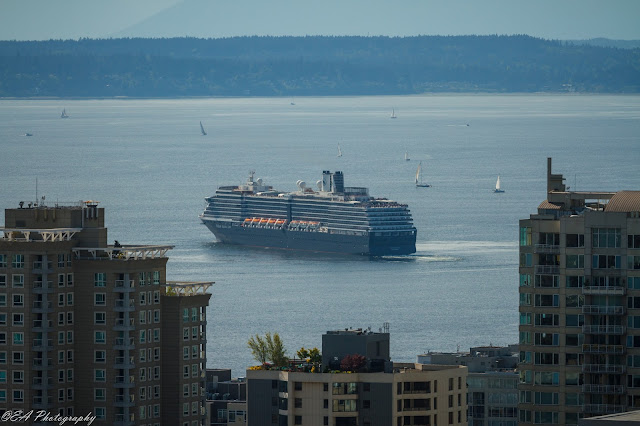 Before sunset we took a taxi to Kerry Park, which is on a high point overlooking downtown Seattle, with snow topped Mount Rainier as a backdrop. I joined dozens of photographers with their tripods set up waiting for sunset & blue hour. It was extremely cold, and my parents and aunt patiently waited while I did what any good photographer does and captured images until the end of blue hour. I was relatively happy with the results considering it was quite overcast and Mount Rainier wasn't visible at all (however, that part was disappointing). 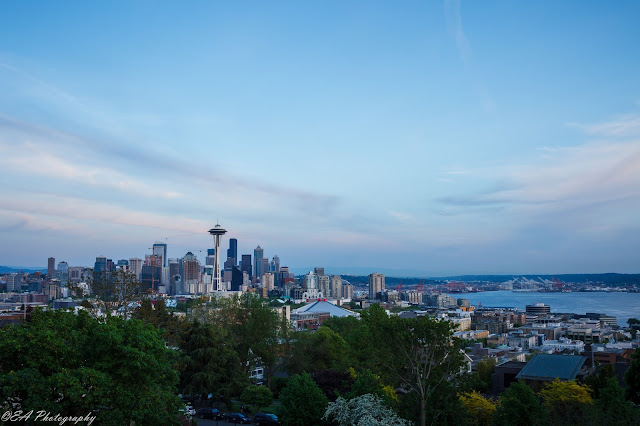 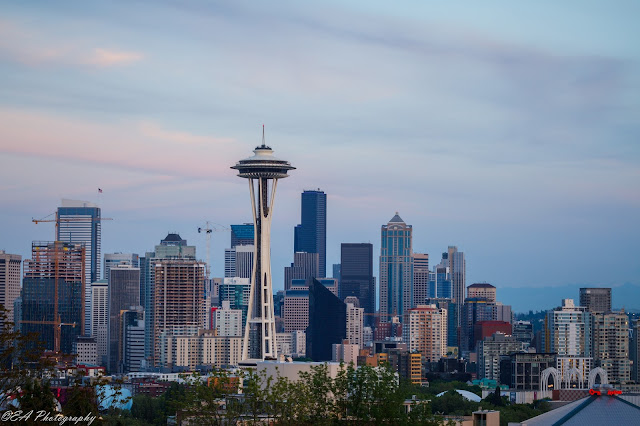 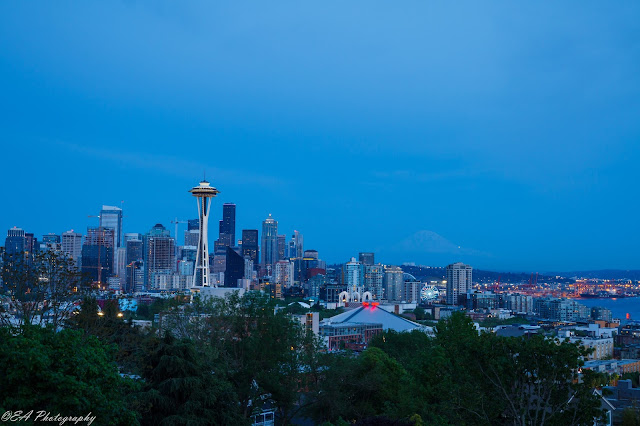 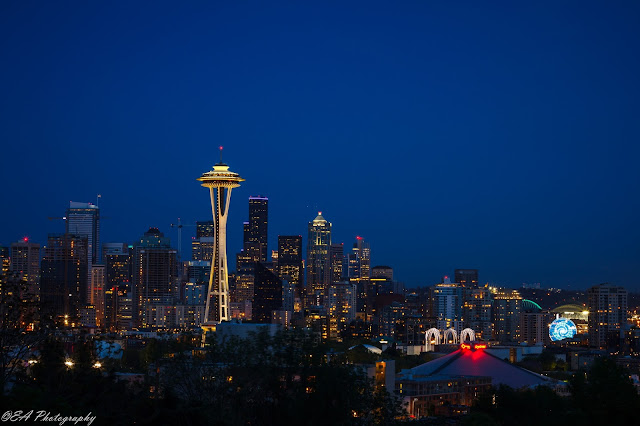 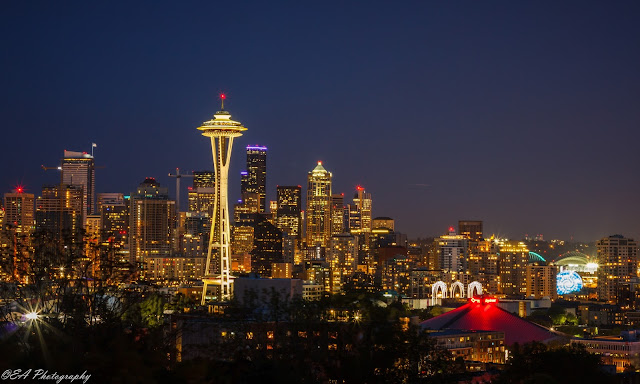 We then took a taxi back to the Space Needle (this is where the young hang out at night) for some night shots before returning to the Hotel, frozen and starving, at about 11pm. I rather liked this bokeh shot of the city lights... 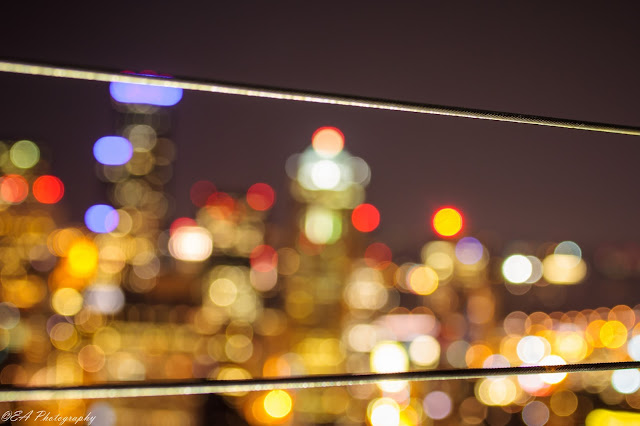 The next morning was my Mum's birthday (as well as Australian Mother's Day) and we had a complimentary  breakfast before heading off to explore more of the city . 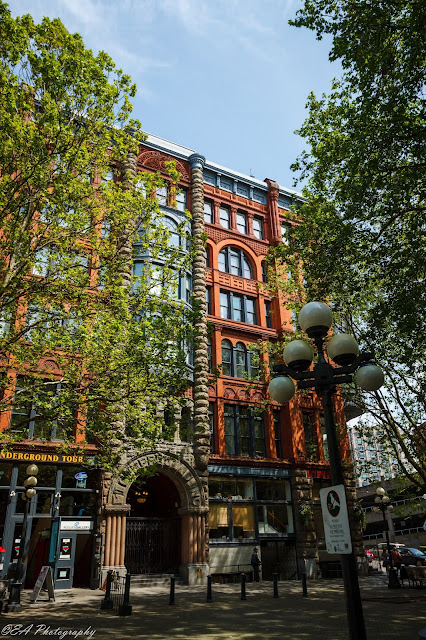 Seattle's Great Wheel is identical to Brisbane's Wheel. We managed to get some great views from our little gondola. 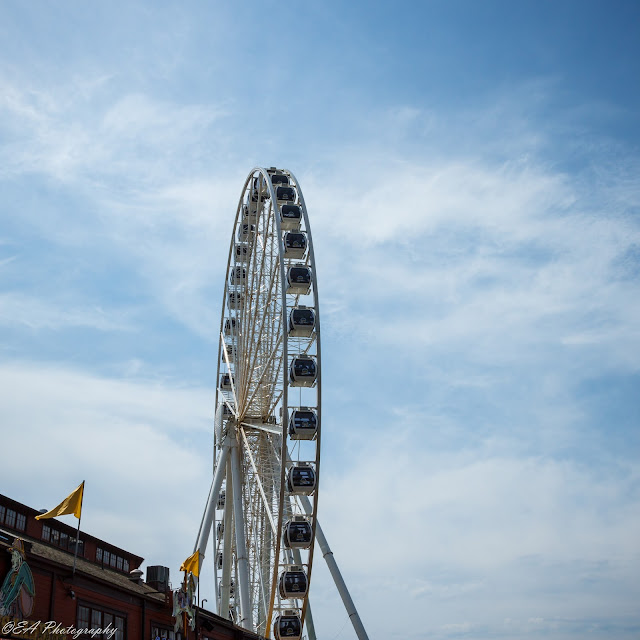 The Seattle Aquarium is a public aquarium which opened in 1977 and is located on Pier 59 on the Elliott Bay waterfront. 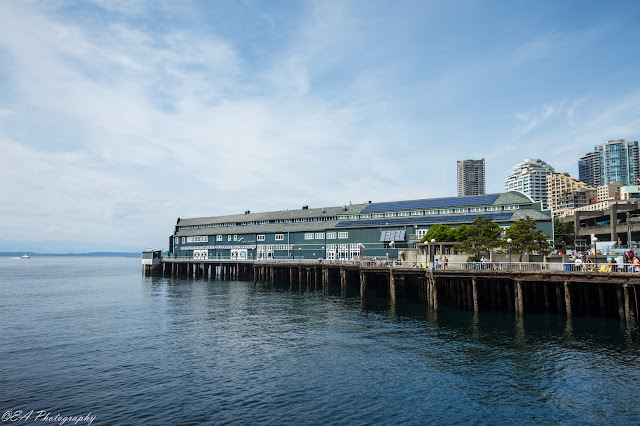 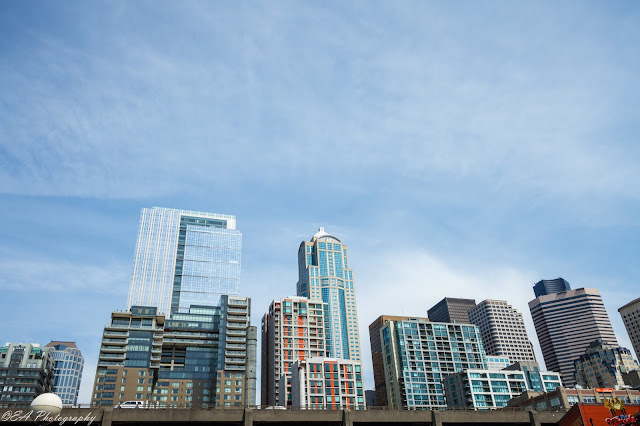 Police boat putting on a show... 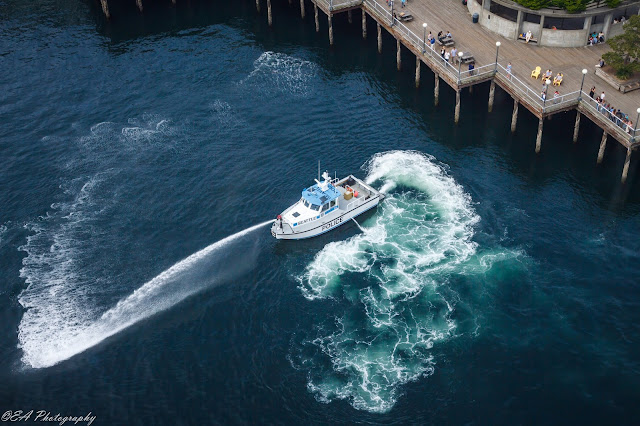 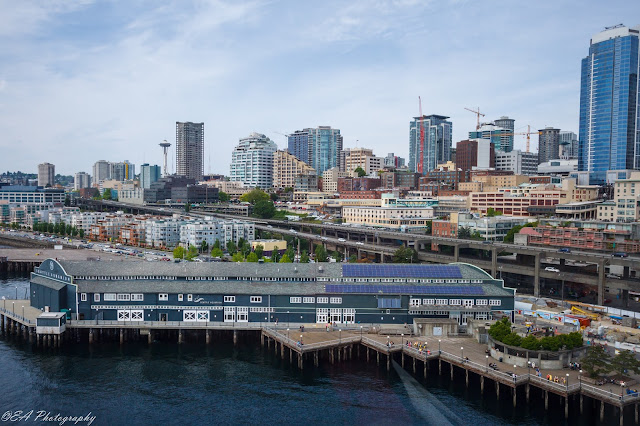 What a great city - I spent a little time there on my way to Australia (we took the long route!)

What an awesome series on your visit to Seattle. I love the views of the city and the tower with the rainbow. Great photos, thanks for sharing. Have a happy day!

Love your photo series I wish I could make like this love it. This city is fantastic and you capture it well, Liz.

Thank you in linking Water World Wednesday. I do appreciate it and see you next week!
Kim,USA

So many amazing scenes with photo opportunities at every turn! Beautiful set of photos Liz.

Gorgeous views of Seattle! Makes me want to go back there soon!

Beautiful night and city views!- only had a plane lay over there, but never actually took tours in the city.

What fantastic images, Liz!
I've visited Seattle twice, and both times really, really enjoyed my stay.
Thank you so much for sharing these here.

I just left a comment on one of your other posts, the one with the heart shaped pool, about reallove dot com. Then I discovered your entry and pictures of my city, Seattle. Very nice!