The Pied Butcherbird (Cracticus nigrogularis) is a medium-sized bird native to Australia with a beautiful song. It improvises extensively in creating new and complex melodies. One of it's calls has been likened to the opening bars of Beethoven's Fifth Symphony. 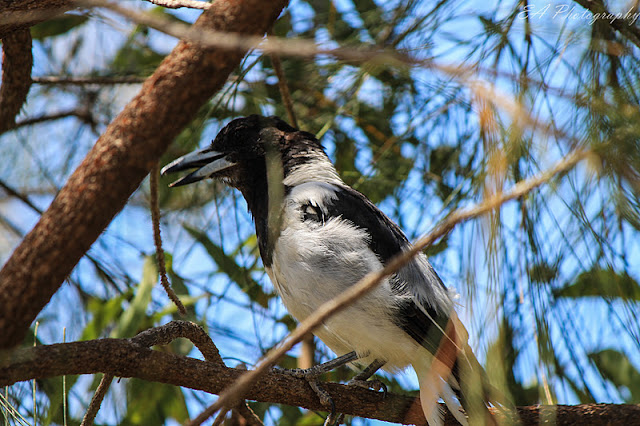 The Pied Butcherbird is common in woodlands and in urban areas. Its diet consists mostly of small vertebrates and insects. They have also been known to accept food from humans.
Its plumage is wholly black and white. Its has a black head, nape and throat, giving it the appearance of a black hood, which is bounded by a broad white collar. It has a hook on the tip of its beak. 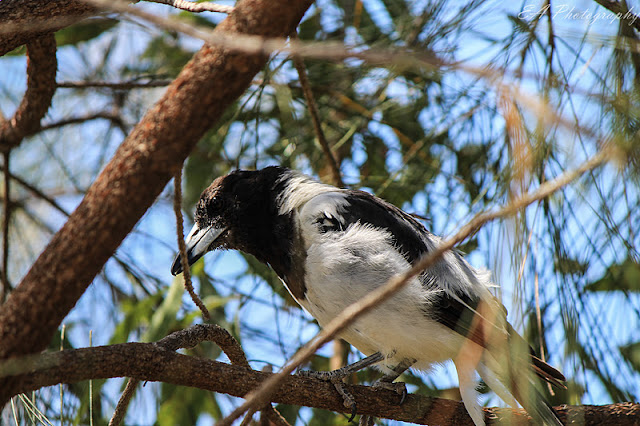 Our home backs onto the freeway. The high noise barrier, our back fence, is lined with Eucalyptus trees which are home to numerous species of native birds. This Summer, our backyard has become daytime playground to a resident family of Pied Butcherbirds.
The juvenile Pied Butcherbird has a buff upper throat and dark brown instead of black plumage. 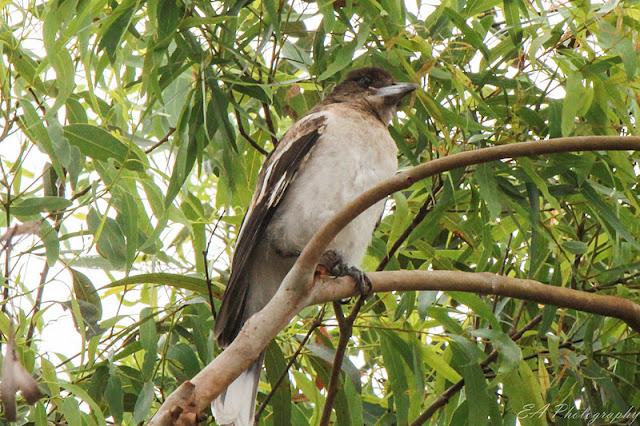 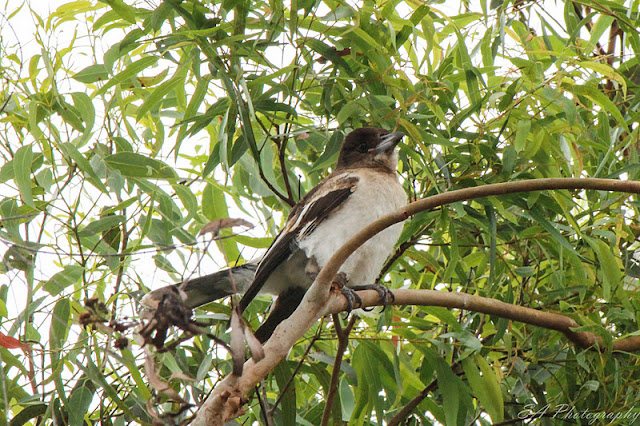 Throughout the day, they can be found on our side fence... 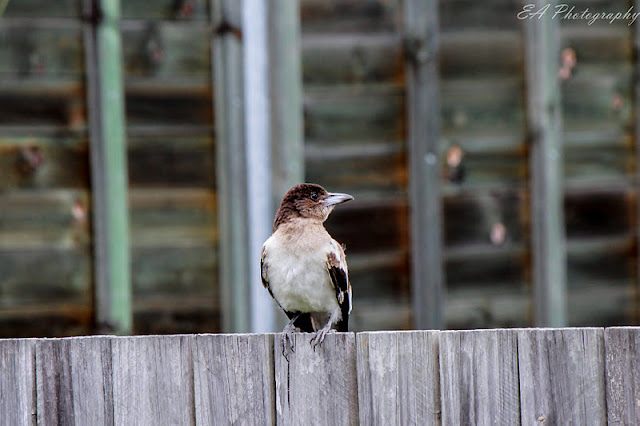 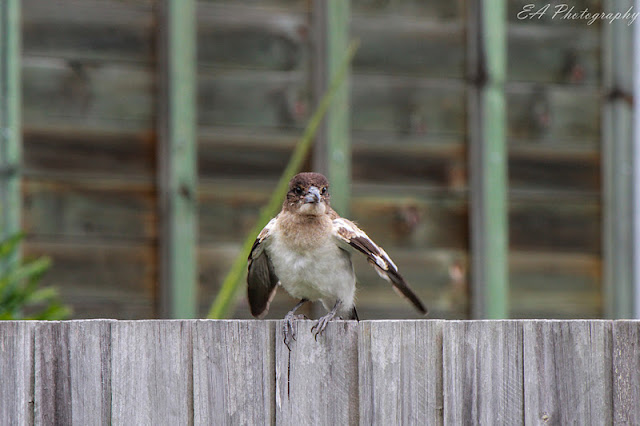 Or looking for food... 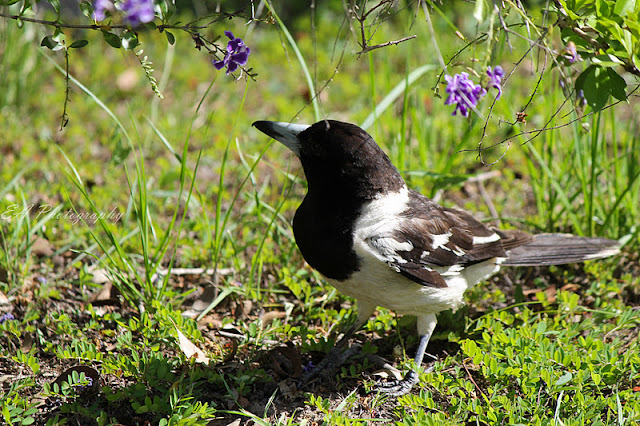 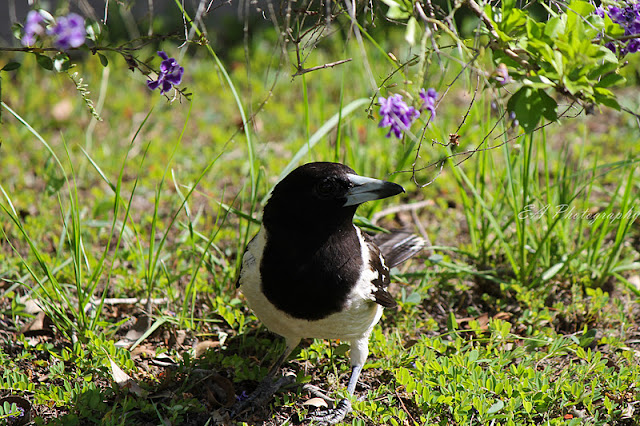 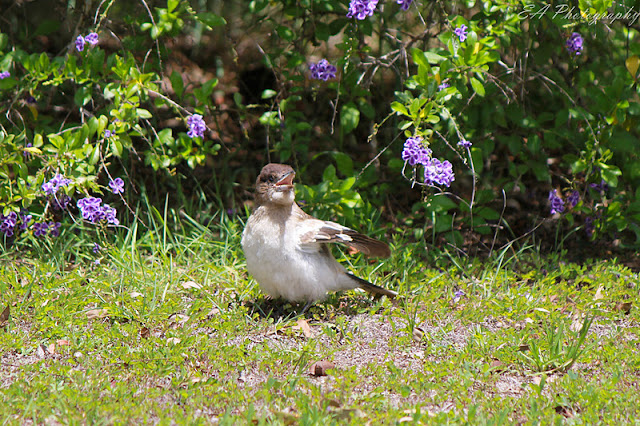 Some of their antics are rather perplexing... 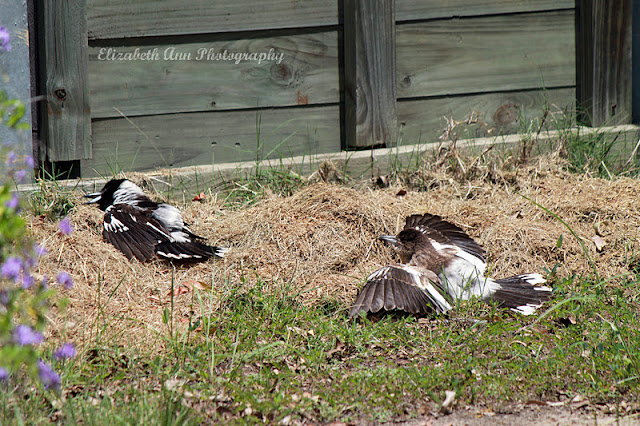 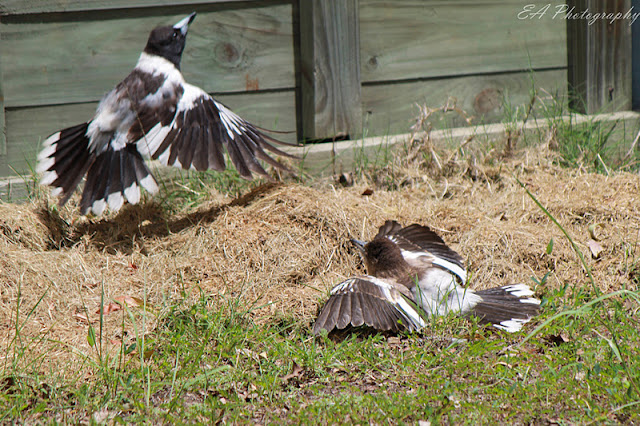 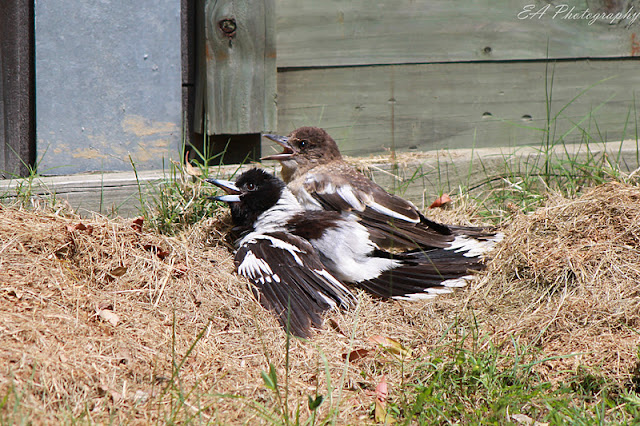 This juvenile is becoming rather bold, coming closer to the house each day... 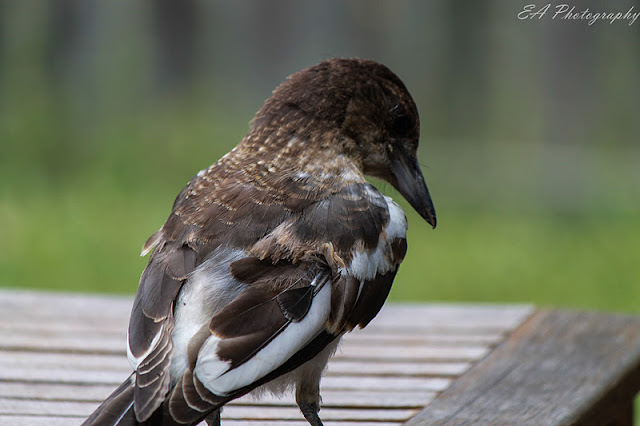 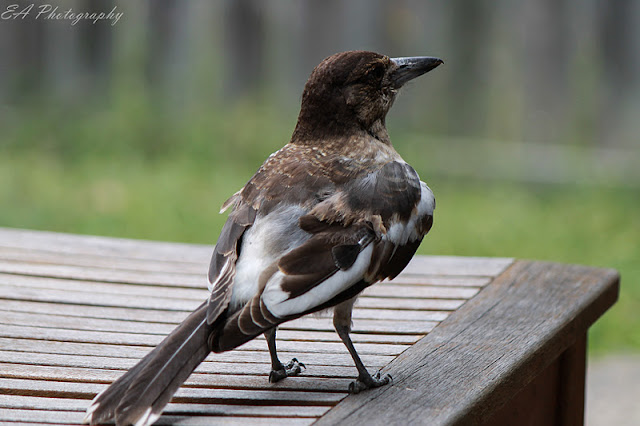 Thanks for stopping by.

See more amazing birds from around the world by clicking the link below:

great shots! these remind me of magpies. :)

Great job, Liz! I really like the fence photos and the last ones of the juvenile.

I always enjoy seeing the birds from other parts of the world. I agree with TexWisGirl, they do look a bit like our magpies.

Wonderful images of your lovely birds.. It has to be a relative of the Magpie in the UK.. I think your magpie is named for colour only..
Many thanks for sharing this lovely poat.

fabulous photographs the butcher-birds; love their call too.

Cool looking bird and wonderful photos. Thanks for sharing your world bird.

Great photos - although they are not my favorite bird when I read how many small birds they take!

Excellent series!
I'd love to be able to hear that Beethoven call. So interesting.

awesome shots liz, they are all just wonderful!!

it's a pretty bird, one i have never seen before!!

They are great shots, and a well-told story. For those who said they look a bit like magpies, yes they do. Liz has pictures of Australian magpies in some of her older blog posts if you want to see the difference.

What a great series of shots...very interesting birds. We don't have birds like these around here,

I found it so interesting to look through these shots - I'd have to pick your 7th & 8th as my favourites. That's great that you were able to identify the photos from Pieces of Contentment - she certainly has her own style. And how lovely that your daughter and family produced a calendar from your works - how lovely a recognition of your work.

Must be wonderful to have the family around your back yard, giving lots of opportunity for close observation. Hope the freeway noise barrier is effective!

Thanks for you comment on my "All New" post. I can tell you understand. It's going to be a good warm up for Uni/pilot training or whatever he chooses. My strengths were Maths and Bio and think it best he has every opportunity to have a skilled enthusiastic teacher in Physics as well as his other subjects. I think he'll step up the the mark and produce some great work.

Such friendly looking birds! I would love to hear their song.

What a wonderful bird species and I had never heard of them, or seen one before. Their feather colouration is so beautiful...very impressive lookig chaps~

Beautiful series of shots. I just love their song although they can be rather naughty towards smaller birds.

Such a great series of pictures you share! I'll have to say this bird does not look like a singer not that my opinion means anything. I love the interesting behaviour you have captured. Excellent post!

These are great shots of a beautiful bird!